The science behind KAATSU training is fascinating. Dr. Sato’s initial observations and experiments on himself to see if blood flow restriction training could produce artificially replicate the physiological conditions of hard training and the subsequent development of KAATSU techniques and protocols have changed the lives of tens of thousands of people. Here’s a quick primer on how KAATSU blood flow restriction works. 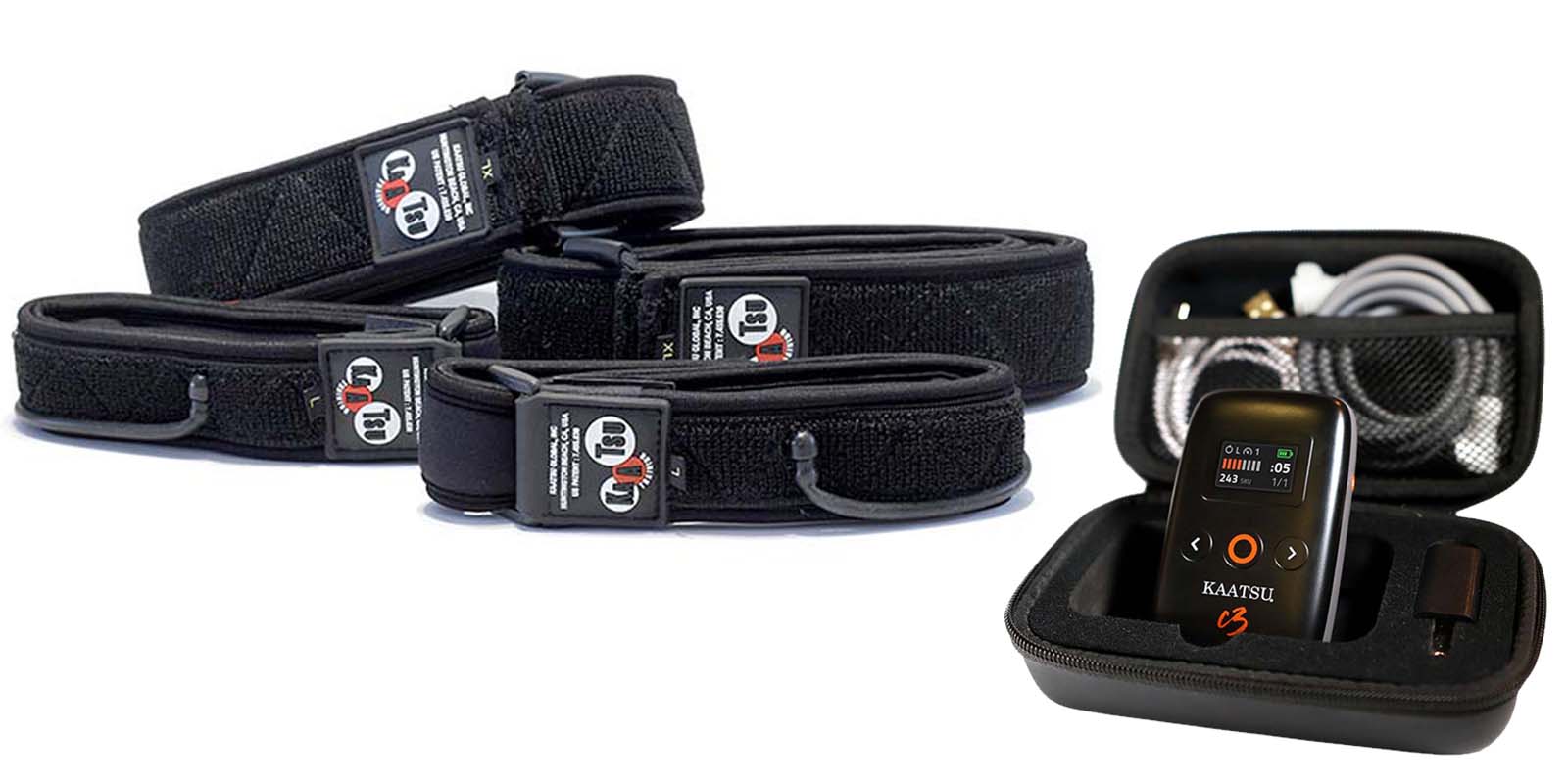 The KAATSU system consists of pneumatically inflatable Air Bands and a small microprocessor-controlled compressor unit. KAATSU Air Bands are worn on the upper arms or upper legs and connected to the control unit by thin air tubes. The KAATSU control unit provides compressed air to the bands causing moderate compression. Sometimes the compression is cyclical, using the patented KAATSU Cycle, or if the user selects, the compression can be sustained using KAATSU Constant mode.

When compression is applied to the KAATSU Air Bands, the limb is squeezed and the flow of blood from the limb back to the heart (venous return) is moderately reduced. This causes the limb to become engorged with blood. More blood enters the limb than is able to leave.

This temporary additional blood circulation in the limb leads to subtle and profound changes in homeostasis. The vascular system increases its elasticity incrementally leading to a secretion of a variety of hormones and growth factors. The capillaries lengthen and expand to improve circulation and vascularity.

Additionally, during the pressure phase of KAATSU, lactate builds up in the muscle signaling the pituitary gland to release HGH (Human Growth Hormone). Growth hormone is secreted in large amounts – simulating vigorous exercise and activating your body’s metabolism. This is what is theorized to cause faster muscle growth when doing KAATSU training.

Dr. Sato tested a variety of methods to modify the blood flow in his limbs. Through experimentation on himself and subsequent investigations with a team of researchers, Dr. Sato came to the conclusion that engorgement of the limb with blood was the safest and most effective way to create the desired physiological changes. That is the KAATSU approach.

When KAATSU was introduced outside of Japan, many people saw the bands and assumed that were being used to occlude. This is where the idea of using surgical tourniquets and even strong elastic bands came from. While occlusion bands can produce results, they work in a very different way.

Occlusion bands (think blood pressure cuffs and tourniquets) are designed to stop the blood flow to a limb. People doing occlusion training have to come to the point of shutting off the blood supply to the limb and then back the pressure off to provide a KAATSU-like effect. This is impossible using KAATSU.

Because the focus is on SAFELY engorging the limb with blood, KAATSU Air Bands are designed so that they can’t occlude when used properly. It was noted in a research study by an occlusion-based KAATSU competitor that they could not achieve occlusion using KAATSU bands, no matter how hard they tried. While they may have found that to be a problem, Dr. Sato and the KAATSU team are very proud of this fact. KAATSU blood flow restriction bands are likely the safest on the market.

I hope this answers the question of how KAATSU works. If you would like more clarification, please read through the other FAQs about KAATSU, or leave a question in the comment box below.