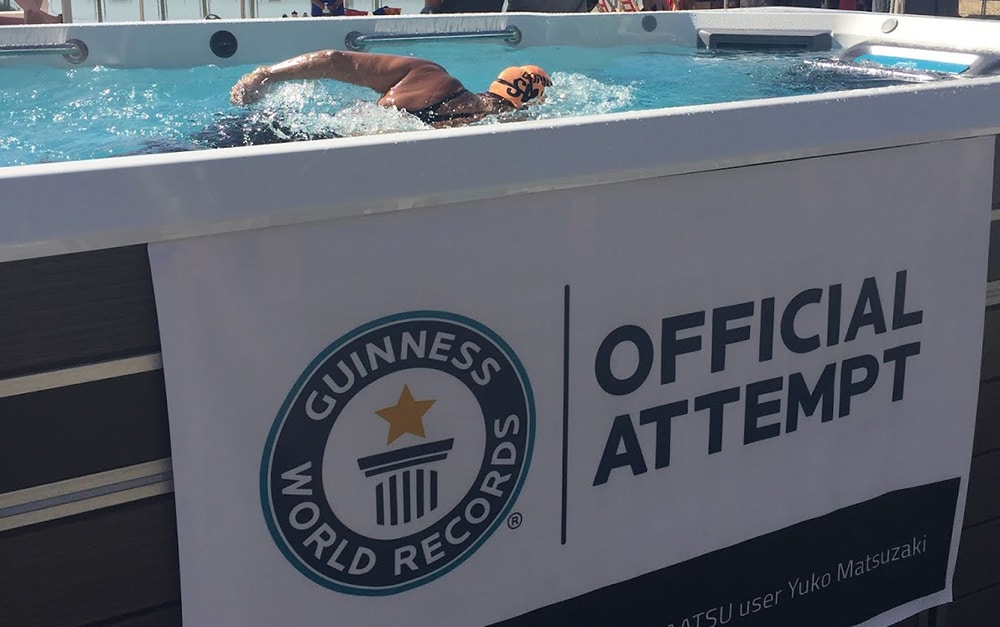 57-year old Yuko Matsuzaki had a prolific career as a swimmer. Inducted as an Honor Swimmer in the International Marathon Swimming Hall of Fame, Matsuzaki had one dream that had eluded her for years: a Guinness World Record. An unexpected opportunity arose – and on October 6, 2019, she embarked on a course to break the world record for the longest continuous swim in a counter-current pool. The existing record was 16 hours. Matsuzaki decided to attempt a 24-hour swim.

Under the Guinness World Record rules, Matsuzaki could take a 5-minute break per hour to use the washroom, eat, or drink. During her attempt she never got out of the pool, but used her break time to stretch and eat some rice porridge, bits of chocolate, and banana slices, with the occasional drink. This was truly a physically and mentally gruelling record attempt.

After around 12 hours of swimming freestyle, her rhomboid muscles began to spasm. Still she continued to swim, although by 10:00 p.m., after 14 hours in the water, she was only able to swim with her left arm, her right arm just hanging by her side. At 11:00 p.m., she switched to breaststroke, which she hadn’t used in over 40 years.

Chris Morgan of KAATSU Global was part of Matsuzaki’s support team. Matsuzaki was a frequent user of KAATSU, and Chris decided to do KAATSU on her arms during one of her rest breaks. Using KAATSU in Cycle Mode for 4 minutes during her rest break gave her immediate relief from her muscle spasms. She was able to switch back to freestyle after using KAATSU, although she still had hours to go to reach her goal of 24-hours of swimming.

Over the final 8 hours, Matsuzaki alternated between breaststroke and 5~10 minutes of freestyle every hour. As the sun began to rise, a crowd began to gather, shouting encouragement and giving her energy for the last push to her goal. As she neared the 24-hour mark, hundreds of spectators were on hand to cheer her on as she ultimately succeeded in breaking the Guiness World Record with a 24-hour swim in an endless pool.

Matsuzaki used KAATSU as a pre-swim warmup, once during a break, and afterwards as part of her recovery. As KAATSU Global CEO Steven Munatones noted, “The KAATSU Cycles helped flush metabolic waste from her muscles and transformed her from being only a few minutes from quitting to swimming another 7 hours to smash the old record.” Yuko Matsuzaki demonstrated incredible mental and physical toughness to accomplish her goal. 4 minutes of KAATSU for recovery at a critical moment helped her get there.