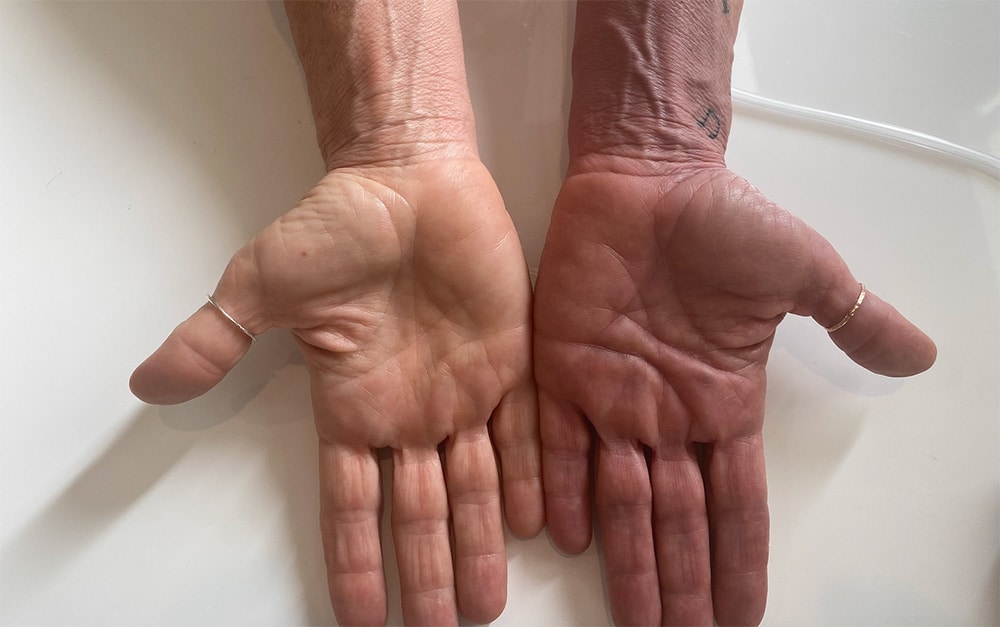 When you first learn about KAATSU, you probably hear the term “engorgement” for the first time in a while. Then it gets repeated over and over as you learn more about KAATSU. What the heck are we talking about when we say engorgement, anyway?

When KAATSU Air Bands inflate, they compress the upper part of the limb. This puts pressure on the veins under the bands, gently reducing the amount of blood that flows back to the heart from the limb. The blood flow never stops, but there’s more blood coming into the arm through the artery than is being allowed out of the limb. This causes the blood pressure in the arm to rise and the veins and capillaries stretch to accommodate the extra blood volume.

Think of it like a beaver dam on a river. The beaver’s dam never fully stops the flow of water – just enough to create a pond around the beaver’s house. The extra water expands beyond the riverbank to create a pond. It’s engorging the river channel with water until the water level rises high enough to spill over the dam.

More Blood, Then Back to Normal

Unlike a beaver dam, KAATSU’s patented Cycle mode inflates and deflates the Air Bands in an automated sequence, compressing and decompressing the veins in the limb and allowing blood flow to return to normal in between compressions. This cyclical engorgement of blood in the limb followed by the release of pressure is unique to KAATSU. It is also what makes KAATSU safe for almost everyone. Pressures start low, then gently, incrementally increase, gradually challenging the cardiovascular system and creating the metabolic conditions that trigger the release of beneficial hormones and other metabolites.

You can see in the photo above two hands. The person in the photo has a KAATSU Air Band on one arm (the hand on the right) and no band on the other (the hand on the left). The hand on the right is darker due to the engorgement of that limb with blood. This is the expected result with KAATSU – a colour change. Depending on your colouration the colour change could lead to your limb becoming more pinky-red, or beefy-red, or somewhere in between. You’ll often see vein distension (veins “popping up”) as they fill with extra blood. All of this is temporary and goes away within minutes of taking off the KAATSU bands. KAATSU causes more blood to enter and temporarily be retained in the limbs. The KAATSU colour is an indication that the wearing is using KAATSU correctly.

I hope you’re now engaged with engorgement! It’s a normal part of KAATSU, doesn’t hurt, and is what causes the body to respond to KAATSU in such a positive way. I hope you’ll give it a try soon!