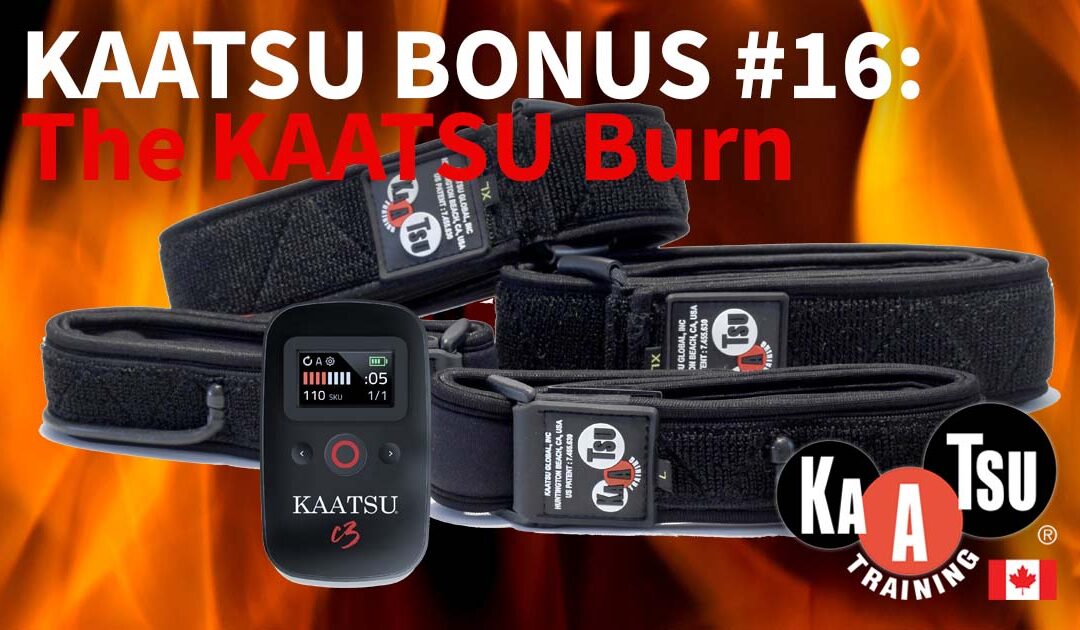 Most recreational athletes don’t know what “race pain” feels like. I’d seen this described in the KAATSU C3 manual but it was something I’d never experienced. Yesterday I took a training ride using my KAATSU C3 in Cycle Mode (High Pressure) on my legs while cycling. Suddenly the concept of race pain was no longer a fantasy – it was an incredible, burning reality. While this sounds like a bad thing, it turned out to be pretty amazing.

When the KAATSU Air Bands are inflated the venous flow of blood from the limb back to the heart is slowed which engorges the limb with blood. Using KAATSU while exercising causes lactic acid and other metabolic waste your muscles create to build up to higher levels than usual, even with light exercise. It’s the lactic acid that is attributed to the “burning” feeling in the muscles you can experience when you exercise strenuously.

I can tell you with all honesty that I’ve never felt such a burn in my legs when I cycle. Not even when climbing the steepest hills or putting out what I used to think was my maximum effort sprinting. The burn I felt was unprecedented – and amazing – because I wasn’t really exerting myself in any way. I was “spinning” – pedaling lightly with a high cadence. I wasn’t breathing heavily at all. It didn’t feel like I was working hard but my legs were on fire.

When the KAATSU C3 is in Cycle Mode, it inflates the Air Bands up to a set pressure which it holds for 30 seconds. It then depressurizes completely for 5 seconds and then inflates the Air Bands again to a slightly higher pressure, repeating the cycle. It was amazing to feel the difference when the bands were fully inflated compared to when they were deflated or in the process of inflating. It was 30 seconds of intense burn followed by an easing off, then as the bands re-inflated the burn would start to build and then hold. I learned a lot about my cycling in those 30 seconds.

Since I had never felt “race pain” like what I’d experienced with KAATSU, I realized I am capable of pushing myself much harder. I proved that today on my third ride of the season. Today’s ride was 31 km and includes a hill that I would typically struggle with this early in my cycling season. As I was climbing, my legs didn’t come close to the burn I felt yesterday when riding with KAATSU so mentally I felt I could push a little harder. Normally my speed would be in the low teens climbing this hill so early in the season but I was able to keep a speed between 15~17 km/h, ultimately cresting the hill around 22 km/h. For the first time climbing this hill this year, this is unheard of. I was completely flabbergasted – and thrilled 🙂

I haven’t done any other major aerobic work or leg strengthening work this year. My exercise has been mostly kendo. Other than that, I use KAATSU twice a day (and 3 times on kendo days). KAATSU is known to have a positive effect on the cardiovascular system and even with light usage (i.e. walking) it can boost leg strength and VO2max. I attribute my experience today to my regular KAATSU use and to finally experiencing the KAATSU Burn which allowed me to mentally push through what I thought were my limits.

It’s possible my experience could have been due to other factors, but I can’t pinpoint any major difference aside from KAATSU. As my cycling season progresses, I’ll be continuing to use KAATSU for short training rides to keep the KAATSU Burn feeling close in my mind.