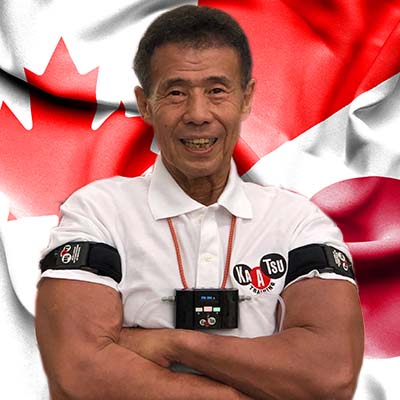 The KAATSU story dates back to 1966, when a young Yoshiaki Sato had a brilliant insight. He’d been in seiza with his legs neatly folded underneath his body while at a Buddhist funeral. When he attempted to rise, he noticed his calves were “pumped”, as if he’d just had a workout. He realized his blood circulation had been restricted and asked himself a key question that began his KAATSU journey.

“I wonder if purposefully constricting blood flow could artificially replicate the physiological conditions of hard training. If this were true, could benefits be realized by only lifting no loads or only light loads instead of heavy weights?” – Yoshiaki Sato, Inventor of KAATSU

Sato spent the next 7 years experimenting on himself daily, keeping meticulous notes about what types of bands he used, what part of the body he used them on, and what the effects were. He was getting results with his bodybuilding but the “moment of proof” of KAATSU would come after an unfortunate injury sustained on a ski trip.

He was told by his father – a local doctor – that his badly fractured ankle and torn ligaments around his knee would take six months to heal. Sato rehabilitated himself using KAATSU bands on his upper legs. Because of the discomfort, he repeatedly tightened the bands while doing isometric exercises, then released the band pressure for a few seconds before tightening the bands again.

Sato’s doctors were shocked at the results. Not only did his muscles avoid atrophy, but he recovered fully from his injuries within six weeks. This was unheard of, but it made people very interested in Sato’s approach so he opened a clinic to treat people. Working for the next decade in his clinic on thousands of clients, Sato learned what worked best for all manner of afflictions.

Sato applied for his first patents for KAATSU in 1994, starting in Japan, then the U.S.A., and Europe. He created a KAATSU Instructor educational program to spread the techniques to coaches, trainers, physical therapists, and physicians. This led to more public acceptance of KAATSU and eventually, KAATSU began to be studied at the University of Tokyo Hospital.

For another decade, Sato collaborated with researchers to explore the benefits and mechanisms of KAATSU. The research created by this team was submitted to peer-reviewed publications and is the foundational work that led to the development of the BFR marketplace we know today. It is because of the documented use of KAATSU on thousands of cardiac patients at University of Tokyo Hospital that KAATSU is known to be safe for the vast majority of people.

Steven Munatones, current CEO of KAATSU Global, encountered KAATSU at a swim meet in Tokyo, Japan in 2000. He met Dr. Sato who took him on as an apprentice, hoping to one day be ready to help Dr. Sato take KAATSU worldwide. That opportunity came 13 years later and in 2014, KAATSU Global was established to spread KAATSU Worldwide. With an incredible team, KAATSU Global has spread KAATSU to dozens of countries around the world, and continues to develop new products in conjunction with Dr. Sato and his team in Japan.

KAATSU works. It’s an incredible story to consider how it evolved from its humble beginnings as a great observation and an inspired question. KAATSU is revolutionizing our understanding of human performance, rehabilitation, and recovery through the safe application of blood flow moderation.